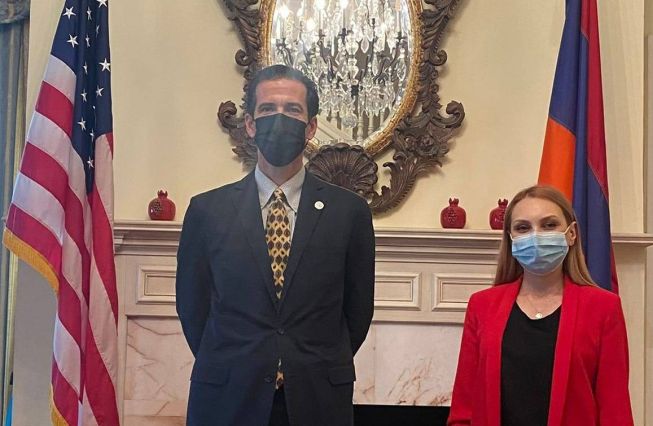 
On October 7th, Lilit Makunts, Ambassador of the Republic of Armenia to the United States received IRI (International Republic Institute) President Daniel Twinning and Eurasia Regional Director Stephen Nix.
Daniel Twinning reaffirmed the organization's readiness to support the agenda of reforms aimed at strengthening democracy in Armenia, and in that regard highly assessed the commitment undertaken by the Government of the Republic of Armenia and the National Assembly towards the implementation of the reforms.
The interlocutors referred to the results of the recent polls conducted by the organization on the early parliamentary elections in Armenia, the security environment and the pandemic, adding that new polls are planned to be organized by the end of the year.
Ambassador Lilit Makunts stressed the importance of the activities of the organization, which provides an additional opportunity to address the issues raised by citizens through polls.
Ambassador Makunts presented the five-year program of the Government of the Republic of Armenia, emphasized the spheres of reforms reflected in it, particularly in judiciary, police branches and fight against corruption.
share:
MFA RA
official website
Dual citizenship
Electronic visa
Visa applications